We certify over 50%
of all organic land in the UK

Organic - A robust foundation for the future of food and climate

With the agricultural sector undergoing a seismic transition,
OF&G (Organic Farmers & Growers) is calling for greater advocacy of organic farming as part of a more robust farm support framework.

One able to respond to the need for food production whilst addressing the significant climate and biodiversity challenges that we now face. 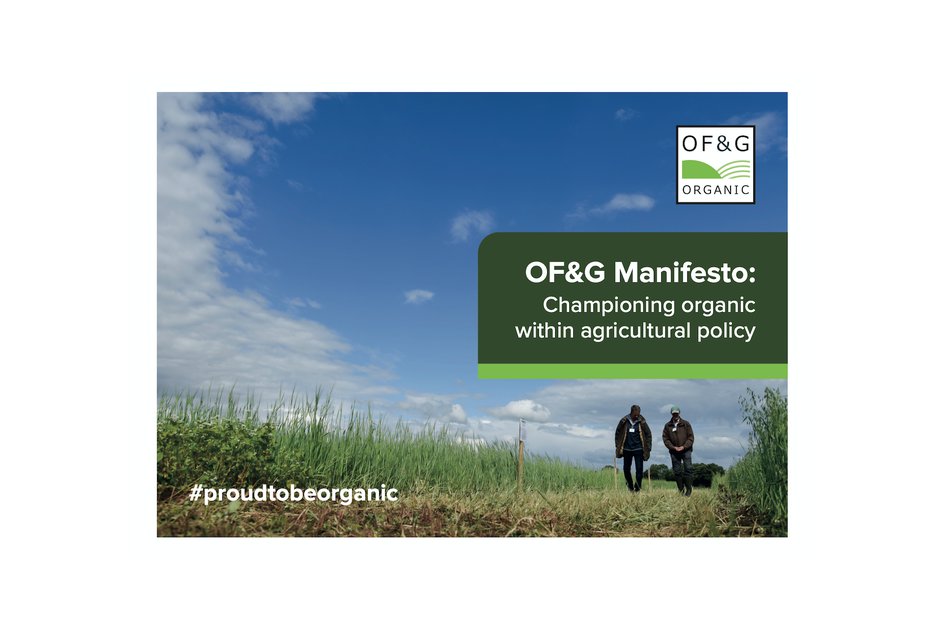 When policymakers and influencers talk about the need for transformation of our food and farming system and the management of our land, they often refer to agroecology and regenerative farming.

However, these terms are defined in different ways by different people and groups.

Organic farming is the only formally recognised and defined agroecological and regenerative approach, yet it appears often to be ‘airbrushed out’ of these debates.

OF&G strongly believes this is missing an obvious opportunity.

Whilst it is important to recognise the broader context and the need to work on many different fronts, organic represents a scientifically proven approach that is working today within an established legislative framework.

After a detailed review of the scientific literature the Cour des comptes cite the benefits of organic farming, particularly in terms of health and the environment, and observes that the development of organic farming is the best way to make the agri-environmental transition successful and lead so-called conventional farms towards more environmentally friendly practices.

From the report:
The positive impact of organic farming on the environment is also well documented. While water pollution, mainly due to nitrates, phosphorus and phytosanitary products of agricultural origin, continues to worsen, organic farming can reduce it. This is why water agencies are providing increasing financial support for organic conversions: prevention is much cheaper than decontamination of drinking water.

Drinking water companies such as that in Paris have started to finance organic farming in catchment areas.

Organic farming has a positive impact on air quality, which is comparatively degraded by ammonia emissions from nitrogen fertilisers used in conventional farming.

Organic farming makes a strong contribution to the preservation of biodiversity, with fauna and flora species being on average 30% more numerous and their populations 50% more abundant in organic crops, whereas populations of field birds and pollinators have decreased by more than 30% since 1990 in Europe.

This form of agriculture emits less greenhouse gases per hectare, particularly nitrous oxide, because mineral nitrogen fertilisers are not used, as well as at the farm level, where organic farming seeks autonomy. 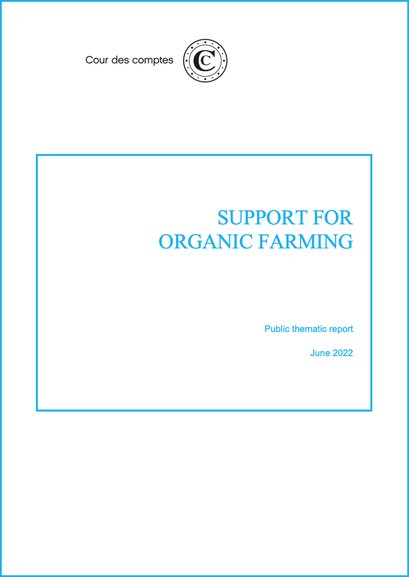 The improvement of animal welfare in organic farming is based on its specifications, which prohibit cages and tethered animals, limit stocking densities, prescribe a more natural diet (fodder, mother's milk) and guarantee access to the open air.

Finally, the development of organic farming has a favourable impact on employment in rural areas due to its attractiveness for young farmers: one third of installations are now organic. This production system, which uses more labour, creates jobs in agriculture, as well as in the organic sector.

To help achieve these objectives, the Court concludes this evaluation with 12 recommendations, grouped into three main guidelines:

Guideline 1: Inform citizens and consumers about the environmental and health impact of the organic farming sector

Guideline 3: promote the creation of value within the organic farming sector

Guideline 2: redirect public support for agriculture to the organic sector

There is a new ‘buzz word’ being championed by numerous industry stakeholders and influencers – regenerative agriculture.

Regenerative agriculture seeks to capture atmospheric carbon dioxide by growing plants that move carbon dioxide into the soil mostly through ‘no-till” and/or "reduced till" practices and permanent perennial pastures and grasslands.

Their analysis of this database found that people using the term regenerative agriculture were using different principles and practises to guide their interpretation.

While there are some excellent regenerative initiatives, the lack of clarity around a regenerative approach is worrying.

It means potentially hazardous synthetic fertilisers, harmful synthetic biocides, and genetically modified or engineered crops with potential risks to ecosystems and to rural economies may all be used. Furthermore, animal welfare may not always be prioritised. In sharp contrast, organic’s legally binding production standards already clearly enshrines the best of regenerative agriculture’s principles.

Over seventy years organic production has focused on strengthening the health of soils; increasing biodiversity; improving the water cycle; and increasing resilience to climate change. Organic farming continues to reconnect humans with nature’s rhythms and ecosystems and has regenerated natural landscapes while providing us with nutritious food.

OF&G believe in the need for a holistic and multi-dimensional approach to soil health and biodiversity enhancement.

Organic focuses not only on the amount of carbon stored in soils, but also on biodiversity protection, which requires a systemic transition of the farming system. 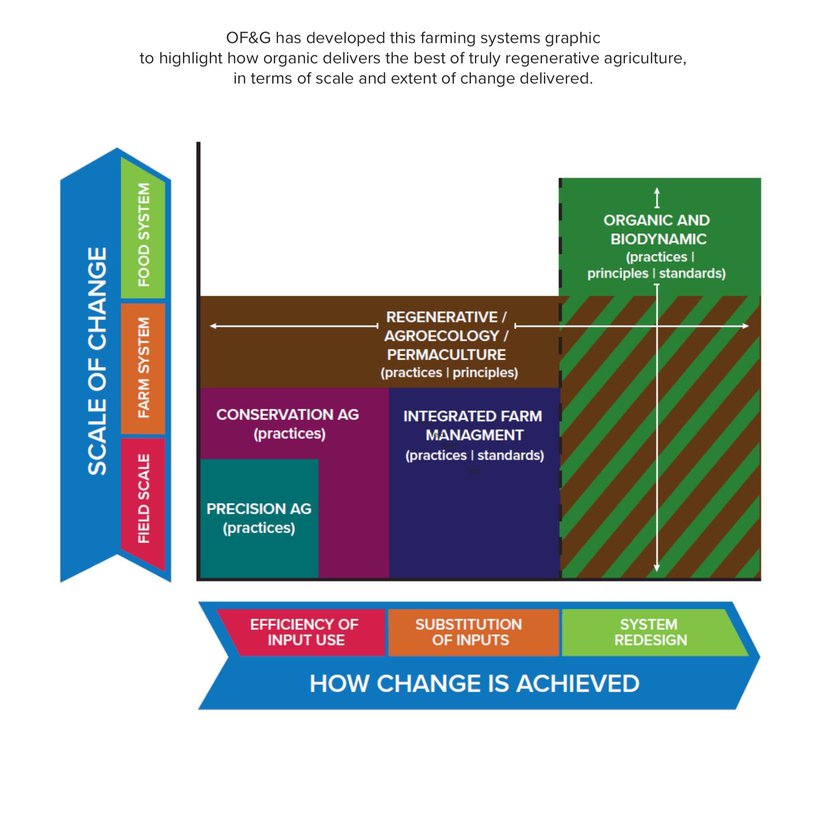 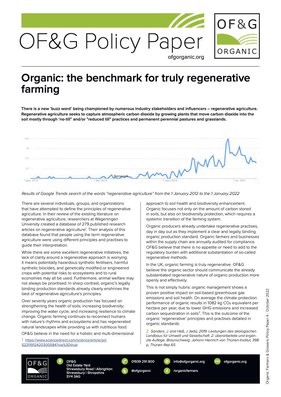 Organic producers already undertake regenerative practices, day in day out as they implement a clear and legally binding organic production standard. Organic farmers and businesses within the supply chain are annually audited for compliance. OF&G believe that there is no appetite or need to add to the regulatory burden with additional substantiation of so-called regenerative methods.

This is not simply hubris: organic management shows a proven positive impact on soil-based greenhouse gas emissions and soil health. On average the climate protection performance of organic results in 1082 kg CO2 equivalent per hectare per year, due to lower GHG emissions and increased carbon sequestration in soils.

This is the outcome of the organic ‘regenerative’ principles and practises detailed in organic standards.

The scheme is available to all farmers who currently receive Basic Payment Scheme (BPS) payments, designed to be accessible, and will reward sustainable practices which support food production and benefit the environment. 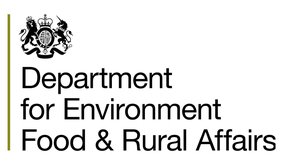 Defra is opening the scheme in a controlled rollout from 30 June to manage the opening in a careful, measured way: for those with no other agri-environment agreements, they’ll be able to apply online straight away; for everyone else, they’ll be asked to let the Rural Payment Agency (RPA) know they want to apply and RPA will get in touch and support them to do so. This is to ensure everyone receives the right level of service and support during this initial phase of rollout. 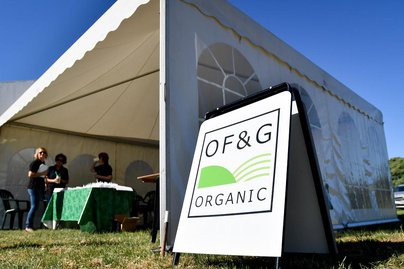 In response to current Government advice that everyone who can work from home should do, the majority of our staff are working remotely.

We would like to reiterate however that there should be no disruption in our services, with the team being available as usual Monday-Friday 9am– 5pm. 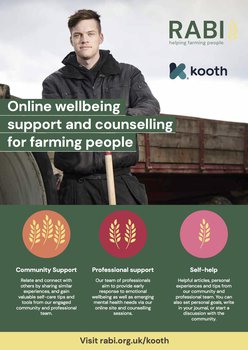 In partnership with RABI, you can access free, safe and anonymous online mental wellbeing support from any device.

Hear what farming people like you have to say about mental health and wellbeing.

Organic Farmers and Growers (OF&G) is a Community Interest Company with more than forty years experience in the organic sector.

The certification process takes you through the whole ethos of organic farming. Don’t be scared of certification – it’s part of the learning curve.

Our ethos is very much embedded in the organic world, so to get certification seemed completely natural and the right thing to do.

Producing organic poultry for Moy Park gives us a chance to make a reasonable income while maintaining the welfare of birds and appealing to consumers who understand the importance of welfare.

We waited until 2015 to get organic certification on our cheese company. We wanted to get our cheese certified because there weren’t that many organic cheeses available in the UK so it does make your products stand out.

What I like about working with OF&G is that you can pick up the phone to your organic certification officer anytime and ask questions. You get to know them and you can enjoy a laugh with them. It’s a supportive relationship.