Farming organically has helped Lancashire farmer John Alpe create a profitable business in the face of volatile milk prices and challenging farm conditions. He explains why converting to organic was right for his farm.

The rolling hills of John Alpe’s 1000 acre farm in the Forest of Bowland in Lancashire may look spectacular, but farming in one of the highest counties in England brings major challenges.

With land ranging between 500 to 1500 feet above sea level, managing dairy cattle and sheep is tough, especially at a scale needed to be profitable – something many farmers have struggled with in recent years.

John and his wife Rachel bought the farm in 1994 when milk prices were 22p/litre and lamb was £40/head, but within four short years the market had turned on its head and the business was struggling.

“In 1998 with BSE and a plummeting currency, it created massive problems,” he says. “The milk price fell to 16p/litre and lambs went to £22/head. None of it added up.” 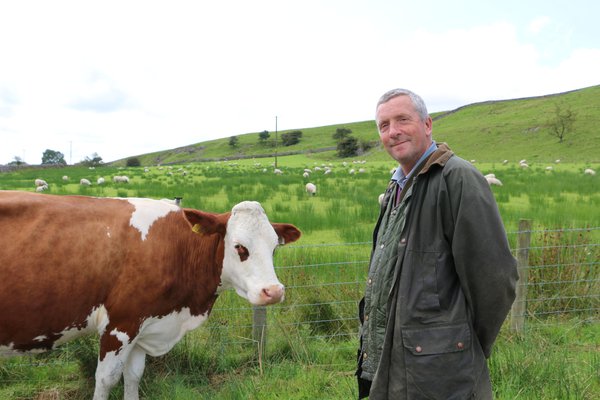 John was left with three choices: To sell the farm, increase output significantly to make his assets work harder, or to go down an entirely different path by moving to organic.

“We decided to look at the stewardship schemes available, and organic was one of those options,” he says. “In a way, organic farming chose us.”

At the time, John was already involved in several countryside stewardship schemes to help him make the most of the landscape and wildlife already on the farm. Moving to organic saw him ‘up his game’, he says.

“I enjoy the environmental side of things and it suits the landscape here. We’ve got nearly 200 acres of heather regeneration, a lot of land in ground-nesting habitat, and we manage the environment to give birds opportunities to feed, nest and breed.

“We’ve also got 300 areas of species-rich, botanically-important grassland, 15 acres of wildflower hay meadows, and 25 acres of woodland,” he adds.

“We’re sweating our asset for the wildlife we have here and trying to make it work for everyone.”

‘Being organic helps sustain our business’

While it’s key to the farm, John’s approach to managing the land organically hasn’t just been beneficial for the environment – it has also helped him ensure his dairy and sheep enterprises remain profitable.

“We wouldn’t be milking cows if we weren’t organic,” he says. “Financially it just wouldn’t work.

“We might be producing a small amount of milk on a large acreage, but what we can achieve environmentally by being organic helps us to sustain the business.

Watch to find out more about John’s farm and his approach to farming: