The certification process takes you through the whole ethos of organic farming. Don’t be scared of certification – it’s part of the learning curve.

Being certified organic has benefitted our land and our finances

Organic champion John Pawsey is a fourth-generation farmer based in Suffolk, where he tends 650 hectares of arable land and rears 500 New Zealand Romney sheep. John is also responsible for managing an additional 850 hectares for neighbouring farmers. All of the farms are managed organically.

Tell us about Shimpling Park Farm?

Shimpling is an arable farm just outside Bury St Edmunds which has been in our family for over 100 years. Part of the farm is a former airfield built in 1943 on land bought by my maternal great grandfather in 1904, so there’s a lot of history here.

In 1999, I converted the farm to organic production because I was concerned about overworked soils and diminishing biodiversity.

My inspiration was a local farmer called Ben Powell who had been farming organically since the 1970s and showed me what was possible.

We converted 55 hectares in the first year then another 55 in 2000. We now farm entirely organically – not just on our own home farm but also on behalf of neighbouring farmers – a total of 1,500 hectares of arable land.

How do you explain your approach to non-organic farmers?

The first thing is to make them realise it’s possible, and the only way to do that is to show them around the farm so they can see it for themselves. Although it does look different to a conventional farm, they can see that the crops are thriving, and even though we do have some specialist machinery, we still talk the same language.

Why did you choose to work with OF&G?

When we originally converted in 1999, the Farming Minister at the time, Elliot Morley, launched an organic farmers scheme which required members to be inspected by a certification body. I had heard that OF&G were extremely knowledgeable and supportive of larger arable farms and that’s certainly been the case in my experience. Also, at the time of the decision we were working with low conventional prices and struggling to make any money, so moving to organic made good financial sense. OF&G are very pragmatic but also extremely rigorous in their certification process.

What have been the highlights of working with OF&G?

The key highlight for me is OF&G’s specialist and dedicated team. The people are fantastic. The OF&G narrative is very inclusive and farmers respond well to that. Although we are organic farmers, we are still farmers. I think OF&G strike a really good balance. They are hugely protective of the organic brand but in a way that is accessible to everyone.

How was the process of getting certified?

Exciting and educational! The process takes you through the whole ethos of organic farming. Don’t be scared of certification – it’s part of the learning curve. If you’re doing it for the right reasons, it’s common sense, and why wouldn’t you want to do it?

What are the challenges of becoming organic?

Fertility and weed control are the major challenges.

We’ve made lots of changes in the last five years to make our system more robust, every aspect of it, from fertility to rotations to marketing. We have a more robust farming system as a result and it’s obviously working because I can sell it. We are converting more farmers to organic than ever before and they have more confidence in what we are doing.

I feel very positive for the future – I think the market is growing and I think we are going to be ahead of the curve.

How has being certified organic benefiting you?

First and foremost, it has significantly improved the health of the soil – meaning we will leave it in good condition for future generations and have a positive effect on biodiversity.

Secondly, it gives me a price premium. As well as benefiting the land, we quickly found that farming organically meant we were better off financially.

The other thing that’s been fantastic is the connection with the market. With conventional farming, I had no idea what was happening to our grains. I had no idea if it was going to end up in this country, feeding pigs or people. But we now know where every grain goes, and what product it goes in to, so that connection to the market for me is a real bonus. 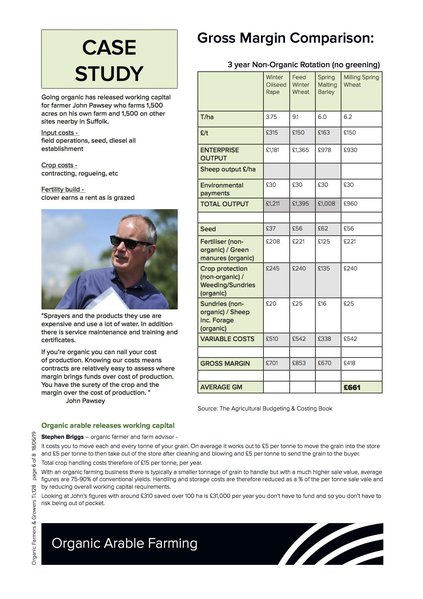 John Pawsey took the business into organic in 1999. Over the years he moved the entire farm into organic production and in recent years has brought livestock onto the holding for the rst time since the 1960’s. 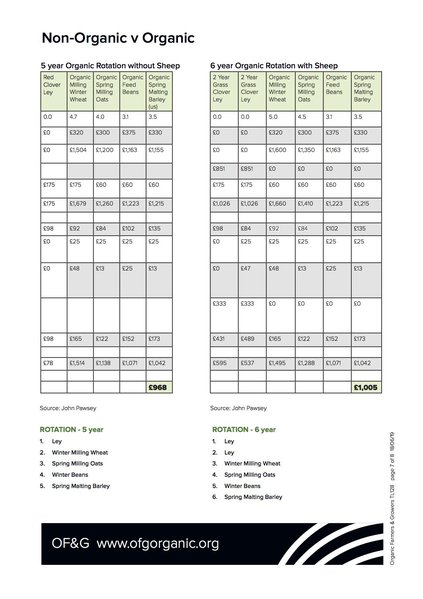 Going organic has released working capital for farmer John Pawsey who farms 1,500 acres on his own farm and 1,500 on other sites nearby in Suffolk.

Fertility build - clover earns a rent as is grazed