On 30 June 2022 France's Court of Auditors released a report evaluating public policy support to organic farming. An english translation of the report has now been made available.

After a detailed review of the scientific literature the Cour des comptes cite the benefits of organic farming, particularly in terms of health and the environment, and observes that the development of organic farming is the best way to make the agri-environmental transition successful and lead so-called conventional farms towards more environmentally friendly practices.

However, the policy of support for organic farming remains insufficient: since 2010, successive action programmes have failed to achieve the objectives of 15% of agricultural land in organic farming and 20% of organic food in public canteens by 2022.

To help achieve the new objectives set by France and the European Union, the Court of Accounts makes 12 recommendations.

The Court prepares an inventory of the scientific literature addressing the benefits of organic farming, both in terms of reducing the negative externalities linked to other agricultural practices and in terms of its own positive externalities, as this form of agricultural production is based on a ban on synthetic chemical pesticides and GMOs, as well as on a strong limitation of antibiotics in animal husbandry.

Although farmers are generally healthier than the average French person, scientific studies suggest a link between exposure to pesticides and several diseases (cancer, Parkinson's disease, etc.), which, if the link is established, could be recognised as the occupational diseases of farmers. Other studies document a substantial reduction in several diseases (cancer and diabetes, among others) in regular consumers of organic products.

The positive impact of organic farming on the environment is also well documented. While water pollution, mainly due to nitrates, phosphorus and phytosanitary products of agricultural origin, continues to worsen, organic farming can reduce it. This is why water agencies are providing increasing financial support for organic conversions: prevention is much cheaper than decontamination of drinking water. Drinking water companies such as that in Paris have started to finance organic farming in catchment areas.

Organic farming has a positive impact on air quality, which is comparatively degraded by ammonia emissions from nitrogen fertilisers used in conventional farming.

Organic farming makes a strong contribution to the preservation of biodiversity, with fauna and flora species being on average 30% more numerous and their populations 50% more abundant in organic crops, whereas populations of field birds and pollinators have decreased by more than 30% since 1990 in Europe.

This form of agriculture emits less greenhouse gases per hectare, particularly nitrous oxide, because mineral nitrogen fertilisers are not used, as well as at the farm level, where organic farming seeks autonomy.

The improvement of animal welfare in organic farming is based on its specifications, which prohibit cages and tethered animals, limit stocking densities, prescribe a more natural diet (fodder, mother's milk) and guarantee access to the open air.

Finally, the development of organic farming has a favourable impact on employment in rural areas due to its attractiveness for young farmers: one third of installations are now organic. This production system, which uses more labour, creates jobs in agriculture, as well as in the organic sector.

To help achieve these objectives, the Court concludes this evaluation with 12 recommendations, grouped into three main guidelines:

Guideline 1: Inform citizens and consumers about the environmental and health impact of the organic farming sector

Guideline 3: promote the creation of value within the organic farming sector

Guideline 2: redirect public support for agriculture to the organic sector 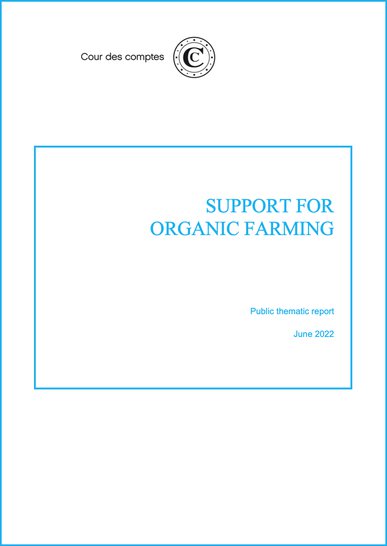 BLOG: Organic is a lighthouse for truly...