On 20 August we wrote to the Rt Hon George Eustice MP, Secretary of State for Environment, Food and Rural Affairs. We want to highlight that a Member of Parliament has incorrectly claimed that organic growers use 'illicit' practices. We call on Defra as the competent authority in this matter to set the record straight.

We have also written to the Telegraph news publication and to Julian Sturdy MP.

We are writing to rebut the claims made by Julian Sturdy MP, chair of the All-Party Parliamentary group on Science and Technology in Agriculture in a media release dated 17 August 2021.

The claim that ‘illicit’ seed is used by organic growers is a falsehood and we are calling for Defra – as the competent authority governing the approval of seed used by certified organic producers – to clearly set the record straight.

As you are aware, the organic sector is strictly regulated under UK law and overseen by Defra. The use of non-organic seed is allowed in organic production but only with prior approval from the grower’s Organic Control Body and with the necessary justifications as set out in UK legislation. These approvals are then listed and sent to Defra on a monthly basis to ensure their oversight. This process would have had to have been undertaken in the oilseed rape trials referenced in the media release. All procedures on the use of seed were followed to the letter of the law, through the required organic Control Bodies, auditors and SRUC. A comprehensive, open report has been produced.

It is also important to recognise that UK Organic Control Bodies, who oversee the day-day enforcement of the UK organic regulation, are both approved by Defra and independently audited by UKAS on an annual basis.

I would also like to note that former Defra minister Lord Gardiner’s comment referenced in the media release and relating to the use of non-organic seed on organic farms is a falsehood that is a repeat of the apparent error made in the Lord’s answer last year to a Parliamentary question in which former farming minister Lord Gardiner was not correct when he made this remark relating to organic food,

To provide additional context; the trials in question represent an important step forward for both organic and conventional farmers. There is an opportunity to expand what is currently a small UK area of organically produced oilseed rape (which further substantiates why organic seed is not available). In showcasing how this important crop can be grown in low-input regimes and without chemicals applied to the seed, aligns to the environmental ambition of new agricultural farm support and should be celebrated and applauded.

We would be delighted to welcome Mr Sturdy and Lord Gardiner to visit an OF&G certified organic farm in their locality and witness first-hand the strength of the regulation surrounding organic production, as an internationally recognised standard, and to witness the hard work undertaken by organic farmers to ensure they comply with organic legislation.

Now is not the time to make ill-judged and misleading claims about organic production or suggesting that farmers are acting illegally when they are irrefutably not. We would ask that Defra, as the Competent Authority overseeing UK organic legislation, set the record straight immediately and ensure that these types of comments are corrected and withdrawn. 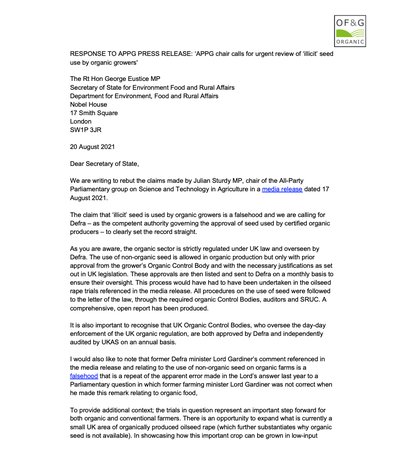