A letter to Ranil Jayawardena MP, Secretary of State for Environment, Food and Rural Affairs, has been sent on behalf of the organic sector and movement across the United Kingdom.

We have written to DEFRA's new Secretary of State to bring to Mr Jayawardena's attention our very serious concerns with the Genetic Technology (Precision Breeding) Bill.

If introduced in its current form the Bill is likely to lead to severe and unnecessary negative economic shocks in the marketplace, undermining the viability of farmers and food businesses across the United Kingdom.

Firstly, we would like to welcome you to your new role. It has been a pleasure to work with you at the Department for International Trade.  We very much look forward to working with you again and continue building UK organic, delivering excellent outcomes both for the economy and for our natural landscape.

We are writing to you, on behalf of the organic sector and movement across the United Kingdom, to bring to your attention our very serious concerns with the Genetic Technology (Precision Breeding) Bill.

If introduced in its current form the Bill is likely to lead to severe and unnecessary negative economic shocks in the marketplace, undermining the viability of farmers and food businesses across the United Kingdom.

A Bill that achieves the same purpose, whilst ensuring that businesses including organic and all those that seek to secure non-GE and non-GM markets can continue, is possible with the necessary changes applied and made clear.

With strong evidence and sound analysis underpinning all decisions, solutions will most surely be found. However, currently such evidence is lacking. There is not yet a proper assessment on the impact to food and farming businesses, organic or similar, that has been fed into the drafting of this Bill.

The Regulatory Policy Committee’s opinion is that Defra’s Impact Assessment for the Bill was rated red, i.e. ‘unfit for purpose’ which signifies a failure to fully consider economic impact. This is largely unprecedented, being the first ‘unfit for purpose’ rating for the Department for Environment, Food and Rural Affairs since at least 2015.

The expert evidence sessions, and following debate at the Bill Committee stage, validated and expanded on the concerns set out by the Regulatory Policy Committee:

For all these three areas, we have included further information in the appendix to this letter. Please see below.

We are aware that following a ‘red’ rating from the Regulatory Policy Committee, decisions on whether to proceed with the Bill are for Ministers to take, and that it is very unusual to proceed without undertaking a more thorough Impact Assessment. We question why this decision was taken in this instance which threatens to undermine long running government standards in evidence-based decision making and that could lead to lower protection for farmers, food businesses and for the public interest.

We call on the Secretary of State to:

[1] Defra has already breached this basic principle in the case of the Agriculture Bill where a ‘narrative assessment’ emerged “too late to assist parliamentary scrutiny”.
The Regulatory Policy Committee expressed at the time “hopes that in future cases, the Department will ensure that IAs requiring RPC scrutiny are submitted at the earliest possible stage, and in any event sufficiently in advance of being laid before Parliament to allow the IA to support proper parliamentary scrutiny of draft legislation”.
It is critical to Defra’s reputation for being evidence based, and for the sake of economic stability, that this does not become a habit.
https://www.gov.uk/government/publications/agriculture-bill-rpc-opinion 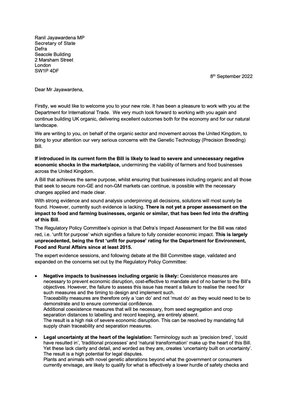 This letter is available to download as a pdf

1.   Impact to businesses including the organic sector

Overall, it is clear from the report by the Regulatory Policy Committee, that the proposed legislation is not underpinned by sound evidence of the broader impact to businesses. This includes to the organic sector. The RPC gave a red listed rating to both the Equivalent annual net direct cost to business (EANDCB) and Small and Medium micro business assessment (SaMBA).

Gene editing is against global organic principles. This is due to a precautionary approach to genome manipulation, and concern for the social, ethical and environmental concerns highlighted below. This fundamental principle, held by the International Federation of Organic Agriculture Movements, will not change. Therefore, the precision bred organisms resulting from this Bill, will not be accepted by the organic sector, regardless of legal changes to GM definitions in England.

This means that without supply chain separation, organic businesses in the UK are likely to face anything from severe disruption to a complete refusal from the EU or other countries, to import products. This includes Northern Ireland, raising major issues in terms of internal market disruption and international trade.

Furthermore, UK consumers will lose any ability to choose whether or not to consume GE products, and given this is a major reason for choosing organic, this could undermine the UK organic market even further.

The cost of all this could be huge – the UK organic market is worth 3 billion.

This is not mentioned in the Impact Assessment. Indeed, there is an absence of any mention of concern about those markets and sectors who do not want, or choose not, to adopt this technology.

Traceability and labelling costs, which work to provide a solution to both these issues, including trade, and which are minimal in cost, are “not quantified”.  The issues of contamination between farms and liability is not assessed. The Impact Assessment does not properly consider or quantify the impact on trade, not only for the organic sector, but also the conventional sector, both domestically and in terms of international markets, where the products are destined for markets where products covered by this Bill remain restricted under legal definitions.

The failure to assess these areas means the Bill, as drafted, is based on incomplete evidence and is not fit for purpose at this time. Supply chain traceability is a ‘can do’ and not a ‘must do’ in the Bill, and measures around cross-pollination and animal production are absent. This creates huge unnecessary risk to a vast swathe of businesses, whilst failing to give the right of citizens to choose whether to accept this technology.

2.   The legal uncertainty at the heart of this proposed legislation.

The Bill aims to create a new category of plants and animals, whose genomes have been altered by techniques under the Genetically Modified Organisms (Deliberate Release) Regulations 2002 (S.I.2002/2443) in a way which “could have resulted from – (i) traditional processes… (ii) natural transformation”. No detail on what genetic change this Bill excludes has been provided, nor any reference to timeframes.

Multiple academic responses to the 2021 public consultation raised concerns around this. Given enough time, it is hard to know what genetic change could not be achieved through traditional breeding or even natural processes, as evident by the evolution of our Planet’s extraordinarily life. Oral expert evidence given to the Bill Committee from Dr Edenborough QC, concluded that the legal interpretation of the Bill creates ‘staggering’ uncertainty of what this means in practice.

He was very concerned that not only is the term, Precision Bred, “ill-defined”, so too is traditional process and natural transformation, all of which are used in the Bill.

A particular phrase in the Bill, 'could have resulted from..', he described as "staggeringly imprecise".

The qualified opinion given by this highly experienced legal professional to the committee was that key terminology in the Bill lacked the necessary clarity and detail. Dr Edenborough QC said that because “things are being defined in a cascading way you have uncertainty built upon uncertainty”. This has very great legal import and is therefore likely to lead to severe economic disruption. The Bill cannot be allowed to progress in its current form.

This affects the entire Bill. Leaving this detail to secondary legislation, without an Impact Assessment and little to no public scrutiny, is not tenable.

3.   Non- safety risks have not been analysed – the role of commercial drivers

In last year’s gene editing public consultation, 82% or more of responses from academics, NGOs, businesses, and individuals, stated that there are non-safety issues to consider if such organisms were to be not regulated as GMOs. A major area of concern is around the risk that commercial drivers, already evident in traditional breeding, will overall push the use of this technology on pathways that are at odds with environmental, climate, social and ethical goals.

There are many complex angles to even this; controversial traits such as herbicide resistance, the layers of intellectual property rights wrapped up with these technologies, the effect on an already poorly competitive global reproductive monopoly, the ability for ‘quick DNA fixes’ to distract from more impactful ecological innovation, the potential for invasive plants resulting from novel traits in the ornamental or agricultural sector…the list goes on. Sweeping such widely held concerns aside without publicly scrutable analysis or evidence creates unacceptable risk.

Back to the top