The National Trust has highlighted the success of organic farming in its recently published ‘farm health check’ report. Yet, as government guides its new ‘public money for public goods’ farming strategy through parliament, the organic sector is concerned that organic options are being side-lined by Defra.

Wimpole Estate Home Farm is licensed under OF&G organic certification and is the only farm the National Trust manages directly - has been organic for 12 years. In that time there has been:

Reporting on the environmental and commercial success of Wimpole,  Mark Harold, National Trust director of land and nature said; “This is a story of hope and optimism – and the Government’s forthcoming ‘environmental land management scheme’ will be crucial to replicating this across the farming industry, as will the new Agriculture Bill in prioritising government support for this scheme.”

Whole farm system approach not yet recognised in government’s proposals

However, the English Organic Forum, which represents organic farming organisations and businesses, is concerned that whilst the government’s ‘public money for public goods’  proposal has many good points, it has not yet specifically recognised the important role that organic farming can play in delivering public goods or the vital importance of whole farming systems.

EOF co-chairman, Christopher Stopes comments; “We are delighted with the National Trust results. We can see that the Trust is supportive of sustainable approaches across all farming practices and the results from the farm at Wimpole clearly shows that organic fits into that very well.  And their publication is timely because the whole farm system approach demonstrated so well at Wimpole has not yet been recognised in the government’s proposals.” 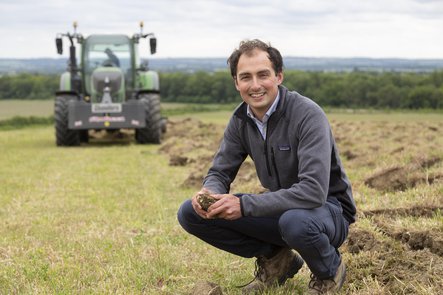 Wimpole is a mixed farming, predominantly arable system, that integrates cereals with fertility building clover leys, green manures and livestock. Farm manager, Callum Weir, believes their results provide a good indicator of a healthy ecosystem. “Our holistic approach to farming at Wimpole is working.  We want to farm sustainably at the same time as being a truly viable business. It’s fantastic to see how nature friendly farming and a profitable farm business, can go hand in hand.”

According to Stopes; “It is this whole system approach which brings production, ecology and environment together in a way which optimises food production alongside the delivery of public goods.”

“Providing a menu of techniques which farmers can choose to take up has merit. However, as Wimpole Farm demonstrates, the whole farm system approach is critical and we are deeply concerned that this is being overlooked by Defra.”

Stopes comments are supported by John Pawsey, chair of the NFU Organic Forum and who farms 1,500 hectares in Suffolk. Pawsey concludes; “This is an exciting time for all farmers but especially for anyone considering organic farming. The National Trust has shown at Wimple how organic farming makes commercial and environmental sense. I hope the government will take note of these impressive results and put in place a framework which allows organic farming to flourish in this country as it is elsewhere in the world.”

The English Organic Forum represents organic sector organisations and businesses. In the UK 3,500 farmers and growers work 485,000 Ha of organically farmed land. Organic production enables nature recovery, delivers public benefits and supplies an organic market in the UK that is worth £2.45 billion per year (market growth of +4.5% in 2019). The EU Farm to Fork strategy, recently published by the EU Commission, has recognised the role of organic production in protecting and enhancing the environment and has proposed a target of 25% of European farmland to be farmed organically.