The Defra Secretary of State, George Eustice, has gone ahead with plans to “use existing powers under the Environmental Protection Act 1990 to lay a Statutory Instrument.”

Defra's intention is that the 1990 Environmental Protection Act be amended to include new GMOs as if the CRISPR gene modification tool and process are akin to 'traditional' or 'natural' breeding.

At OF&G we disagree and believe that such a premise is incorrect and potentially very harmful.

We have responded to The Lords’ Secondary Legislation Scrutiny Committee (SLSC) who scrutinise all statutory instruments (SIs).

Our letter to Lord Hodgson is available to read here:

I am writing on behalf of Organic Farmers & Growers C.I.C to raise our concerns with a Statutory Instrument (SI) laid on 20 January – The Genetically Modified Organisms (Deliberate Release) (Amendment) (England) Regulations 2022:

Organic Farmers & Growers has more than forty years of experience in food and farming. We were founded in the seventies as a marketing cooperative for organic farmers. In 1992 OF&G became the first body to be approved by the Government to run an organic inspection and certification scheme in the UK and today OF&G is the largest certifier of UK organic land and certifies over 30% of the UK organic supply chain.

Our concerns with the SI are that this proposed change in UK law is unnecessary and appears to be based on a flawed understanding of plant breeding and environmental risk assessments and is likely to lead to harmful outcomes for plant breeders, farmers and for the environment.

We would very much like to offer our perspective on key points in the SI.

The need for this SI is not clear to us and we do not accept a justification on the basis of time, faster or slower.

It is already possible to breed many times during a single season using cross fertilisation in conjunction with gene sequencing in order to assess which traits are establishing prominence or not. That is a very well established and successful practice in pre-breeding and is done speedily, safely with the usual checks including assessment of risk.

We would also very strongly contest the following:

The phrase ‘to occur naturally’ is not one we would recognise in any way that would align with the techniques involved in altering genetic material by the invasive practice such as is used by the CRISPR tool in what is often referred to as ‘genetic editing’.

We describe our concerns on this and other points in detail in our response to the Defra consultation on the regulation of genetic technologies:
–
https://ofgorganic.org/news/of-g-response-to-govt-consultation-on-regulation-of-genetic-technologies

This section from our response to the Defra consultation is here particularly relevant:

… we hold that any future revision to regulations in the UK should ensure that:

·       all forms of gene editing are subject to robust regulation and risk assessments over and above basic health and environment regulations;

·       all aspects and stages of gene editing processes and products in the supply chain should be transparent, monitored and clearly labelled;

·       that the regulatory system should be broad based in goals and structures encompassing citizen involvement, transparency, ethical considerations and societal goods and services.

We consider that the organic sector has successfully developed on the basis of an unusually high level of trust between organic farmers, growers and consumers and we will be robust in protecting this relationship.

Therefore, we are strongly opposed to any attempt to redefine any form of gene editing as non-GMO as we believe this will constitute an existential threat to the integrity of organic farming, organic products, both domestic and global markets and the relationship between organic farmers and consumers.

Any redefining of genome-editing as non-GMO would also put the renegotiation of the current organic equivalency agreement embedded in the UK/EU TCA by December 2023 in serious doubt due to this significant divergence.

Risk assessments must have been in place and checks properly made in all situations with plant breeding especially in the field where escape does pose a significant risk.

In the event of an incident such as an escape of genetic material from a deliberate release then questions would be asked, who would be at fault and what recourse would be available where contamination has occurred. For instance, where the wider environment has been contaminated this could lead to environmental and economic damage. And this is where public scrutiny would begin an examination looking back at what had taken place and how those events brought together led to the incident.

Finally, we would also like to ask how such a circumstance would affect our licensees across the UK, so also in Wales and Scotland? The SI states the change would take effect in Wales and England. Both the Welsh and Scottish governments have strongly voiced their opposition to laboratory originated genetic alteration for food crops and have disallowed their release into wider environment and clearly would require risk assessments and checks for any deliberate release.

We firmly believe that this SI presents a great many challenges that are not entirely represented in the documentation. We would welcome the opportunity to discuss all of these points in detail whenever convenient. 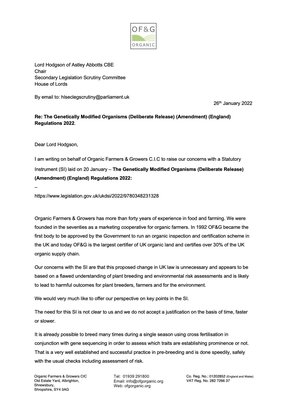 UPDATE - Monday 14 February 2022
Our submission to the House of Lords Secondary Legislation Scrutiny Committee has been accepted and published.

The HoL Secondary Legislation Scrutiny Committee 29th Report of Session 2021–22 is available to download as a PDF and which includes Defra's response to our concerns and those of the other submissions.